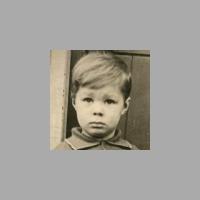 Well it's 1950 and this photographer guy is knocking on doors trying to make a living, and I guess mom felt sorry for him, thinking he could do with a good meal and decides to let him take my picture. Well I've always been a serious sort of guy, but you know the cliche, smile for the camera, but I didn't, so the guy hands me his cigarette lighter (smoking was fairly cheap in those days, even for the unemployed working class). I guess he thinks that will cheer me up, but it doesn't, so he tries some friendly banter, but what nobody realised yet was that three years before, I had been born practically deaf, so I was considered by the medics as a little slow, perhaps even a little retarded, what with not talking an all. So he takes my picture anyway and I'm thinking to myself 'who is this guy anyway' and then he want to take the cigarette lighter back which I thought was a little rude since he had just given it to me.
Well it didn't make much difference since I never started smoking until I was about 10 or so. I remember older kids showing me how to roll ciggies from discarded buts using the paper tissue that could be separated from the foil liner of the discarded cigarette packages. I don't think they had trash cans in those days in my then home town of Middlesbrough.
I was actually born on the other side of the river at an abandoned anti aircraft installation. My parents were squatters and made a home out of the officers mess which was basically a wooden hut, it was bitterly cold and snowing during the winter of '47 when I made my debue.
I can remember that the year for us kids was divided into seasons for stealing stuff. There was rubarb raiding season, apple raiding season, those tiny crab apples sure were sour but we ate them anyway. There was a certain time of year when we used to scale the high brick wall of the local nunnery and steal nice pears from their orchard. I was caught once and roundly scolded, but was also told that if I wanted some pears all I had to do was to go to the front and ask for them. I took them up on the offer once, but it took all the fun out of the exercise, and though juicy, those gifted pears tasted rather bland compared to the stolen ones.
From kindergarden up, most of my school teachers seemed to be under the impression that I was some kind of artist. I couldn't understand why, because I always found painting and drawing to be a real struggle, real hard work, and I still do. Anyway, this perception led to my being picked for involvement in various school art projects. I was quite young when I was asked to work on a big frieze for the wall of the classroom and I was quite worried because I didn't know anything about eskimoes or icebergs, and had certainly never seen, let alone drawn such things, but when I shared my concerns with my mom and dad they couldn't help but laugh. It was very disconcerting. When I finally got started painting igloos and such, the teacher asked why I chose that particular subject matter, I retorted "How else am I gonna represent a big freeze?".
My first contact with virtual 3d was when I was about 7 years old, muddy coloured comic books printed in red and green smudgy pictures that sort of popped out of the page when you looked at them through coloured gelatin eye filters. Yey that gelatin got pretty obscure when it got damp and gathered dust. I kind of figured out how it worked, the distance between two similar points on an image related to how far it popped out of the page so I made a guage out of a strip of paper and started drawing in 3d using red an green pencil crayon and looking at my work through coloured candy wrappers, and you know what, it worked.
I remember my brother going round the back yard of the local pub and grabbing a crate of empty bottles, then we'd take em round the front and tell the landlord that our dad had asked us to return them for a refund, well that worked too, so we tried it again and the same thing but the third time he cottoned on and we had to run like hell.
My next experience with 3d was making non virtual models in plasticine (sometimes known these days as synthetic clay). Well I remember this talented kid in school who made a collection of paleolithic flint tools out of the stuff, and mounted them with a card that claimed that they were from the plasticine age, they looked pretty impressive and were on display at the end of the school hall for months.
Well stop poking around and buy something.

Jack for M4 by johnbarker ()

Coupons do not apply

Requirements:  Michael 4 by DAZ, Poser 6 and up,

Coupons do not apply